You should be familiar with a few key terms before working with Azure Automation DSC.  Knowing these key terms and how they are related, will help you better-understand the entire toolset.

Configurations are a concept introduced with PowerShell DSC that allow you to define a desired state of your environment using PowerShell syntax.  Configuring the environment requires the definition of a Windows PowerShell script block using the configuration keyword, followed by an identifier, and then braces ({}) to delimit the block.

Resource blocks are defined within the node configuration block to configure specific DSC resources such as IIS, File Services, etc.  A resource block starts with the name of the resource, followed by the identifier you want to specify for that block.  Braces are used to delimit the block in the same manner they are used to delimit the node configuration block. 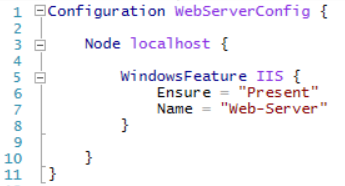 DSC nodes are notified of node configurations that pertain to them via either DSC push, or pull methods. Azure Automation DSC relies on the DSC pull method.  What this means is that DSC nodes actively request node configurations from the Azure Automation DSC pull server.  A distinct advantage of using the DSC pull method is that the DSC nodes can live behind a firewall with all inbound ports closed.  All that is needed is outbound access to the internet.  There are no firewall issues to deal with.

Extending the set of built-in DSC resources is possible by importing additional resources as part of PowerShell Modules as well.

There are, of course, other terms you may encounter.  However, these are the most important.  As long as you are familiar with these terms, you should be able to carry an intelligent conversation about the workflows involved in Azure Automation DSC.